Great British Racing has launched its Everyone’s Turf campaign to showcase how there is something for everyone this summer at British racetracks and to help to maintain and grow attendances during the vital July to September period.

The campaign is being run on behalf of the Racecourse Association (RCA) and is funded by the Horserace Betting Levy Board (HBLB), with additional contributions from GBR.

The national campaign is fronted by broadcaster and former footballer, Jermaine Jenas, who features in promotional content shot last month at Sandown racecourse, along with headline creative showing racing as an inclusive and welcoming sport for all.

Everyone’s Turf will run as national advertising-led campaign, showcasing the different facets of the sport, with assets shared across racecourses to ensure consistency and prominence across the summer period. It builds on the findings of GBR-led consumer research which shows that consideration of a day at the races is particularly high amongst 25-34-year-olds and focuses on this audience, whilst also encouraging existing fans to return to the races. 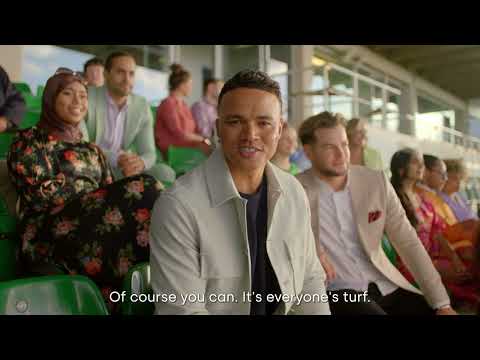